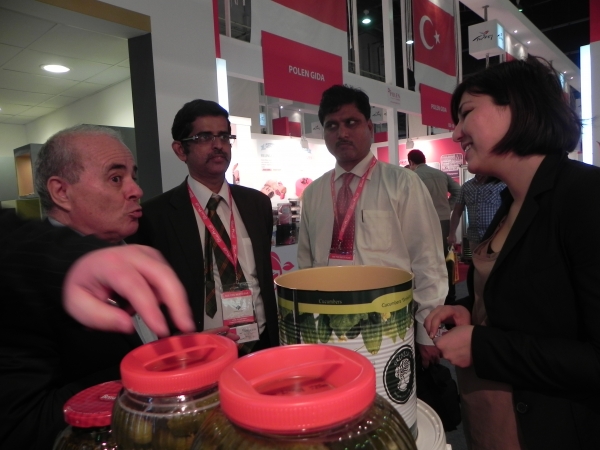 The Gulfood Fair, which took place between the 19th and 22nd of February 2012, introducing food, beverage and packaging firms to potential buyers, was visited by 62.000 visitors, 150 countries, and 3800 participants. The fair gave the priority to exposition of food products, secondly the beverages and then the food packaging systems. The fair is a place for exporters to find new markets, opportunities to meet new customers, and provide a possibility to make market analyses. It has an effect to increase the export by helping to reduce the cost to search worldwide customers through indirect ways and encounter target consumers.

More than 100 countries joined the fair including Pakistan, India, Italy, Türkiye, Spain, France, Algeria, Sri Lanka, Lebanon, Jordan, U.A.E., South Korea. Since food investments increased to Middle East, and a higher demand occurring for our country, Berrak, which decided to participate the fair also to enhance its prestige in the international market and its brand awareness, shared their opinions.

Berrak’s Foreign Trade Manager Pınar Akova states: “About 300 firms visited our stand. Our products have been receiving positive feedback about our quality, taste, brand and visuals. Since Berrak is the Burger King’s pickle supplier, we met with our Middle East Burger King customers to introduce our new products. Due to fact that our pickled product groups are more popular in Middle East market, these specific consumers tend to visit us more.” Akova concludes “After our last year’s admission, we successfully concluded our sales in Iraq and Saudi Arabia. This year, we aim to be in close touch with other Middle Eastern countries.”
Berrak’s General Manager Tamer Ersoy says: “Attending to Gulfood Fair contributed in selecting new target markets and creating exporting marketing strategies. At the same time, it gave us one more chance to promote our brand Berrak in an international arena.

To be known in international arenas needs many presentations to numerous countries therefore such important fairs as this one has a major effect on export. The interest we’ve been receiving in the fair shows that the results are promising for us. We are also planning on attending the Ukraine’s WORLD FOOD 2012 FAIR."