Capers And Its Benefits


Capers, another name is geberotu; It grows in areas where the Mediterranean climate is dominant. Generally; It is naturally grown in Western Anatolia, Central Anatolia, Tokat and its around, Eastern Black Sea and Southeastern Anatolia’s provinces. The capers plant: It grows vertically and horizontally in a bushy structure and it is thorny. It is very rich in terms of phosphorus, potassium and calcium. This plant loves clay soils, due to the love of the sun it usually grows spontaneously on the slopes facing the sun. it grows spontaneously and develops well on the slopes facing south. Because it is a plant that loves the rich calcareous and clayey soils and likes the sun. There are quite a lot of vitamins and proteins in the flower buds.

According to a research determined 100 g dry matter in the flower bud;

Capers, which we have benefited very much in the food, cosmetics and pharmaceutical industries, are exported in brine to abroad. Canned capers can also be consumed as pickle, salad, over pizza, fish and hunting meat as well as garnish. The buds are kept in salt water for three months in a jar, by putting vinegar at a rate of one to one in it and consumed after yen days. Capers is a very useful plant and it is a plant that brings foreign exchange to Turkey because growing in our country. Spain declared Capers as "National Plant’’, thanks to earning $ 20 billion annual from the buds of capers in Spain. Capers is in state protection in Spain.

Capers is a plant that Evliya Çelebi also discovered 400 years ago. Evliya Çelebi had not even can’t help writing about capers in his books. In the Mediterranean countries, besides using in foods and medicine for medicinal purpuses from past to present, it is also benefited in cosmatics industry.
Capers has buds as size as pea. These buds is quite rich in terms of protein, vitamins, minerals. Besides this, these buds quite satisfying. Apart from the buds of capers, its fruits that is called "karpuzcuk" among the society and tips can be consumed by passing brine and vinegar. Buds and tips of capers, so all part are quite useful. Its branch tips and buds are used generally in the food sector; its hard branches, roots and fruit are also used in cosmetics and pharmaceutical industry. Researches at the International Cancer Institute has put capers between the plants which used to prepare "extract" that provided antitumor activity.
Capers can be found in all the coastal areas of Tekirova region of Antalya. Pickle made from capers buds may be found almost all of the markets around it. Pickle is also made from the fruit of the capers. This pickle is even more beneficial.

Benefits of the capers
• Its prominent with pain relief feature
• İt helps to regulate the digestive system.
• It has onstipation relieving feature.
• It is a very good diuretic.
• It has an expectorant feature.
• It regulates the menstruation
•It helps to reduce worms and parasites.
It's quite good to rheumatism pain
• It reduces the risk of stroke.
• Its seful in scurvy disease.
• It is good for blood disorders.
• It is very useful for gout disease.
• Its is effective the antitumor
• It is very beneficial to stomach problems and ulcer.
• It is very useful for the hemorrhoid problem.
• It is very useful for spleen growth.
• It relieves symptoms of hip disorders and reduces risks.
• It is among the plants recommended for raising the thrombocyte quantity especially in cancer patients.
• It regulates liver functions.
• It is quite good in Multiple Sclerosis (MS).
• Suggestions for couples asking for children because it is a sexual power-boosting feature.

Benefits of capers plant are innumerable, but there is a point to pay attention. Capers are as harmful as they are useful. It can be poisonous. For this reason, it is necessary to consume capers that are sold in the form of processed capers or tablets. If it is consumed as soon as it is collected, it can poison. First, it should be dried in shadow and must be taken its poison.
How to use capers?

The capers is collected especially without opening the seeds of the flowers and it is used the treatment purposes for drug manufacture. Other than this, Its fruits and leaves are also used. Pickle can be made. It is a tasty preference for salads and especially for fish recipes. 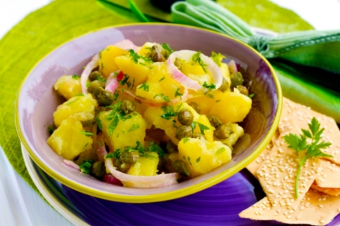 Click here for the recipe for potato salad with capers